LED Solar Technology for my House
S.V.SHINDE,Trimurty Plot No 31/A, Yeshwantnagar, Pimpri, Pune 411018
Phone 9822048582(pune), 02027464274, 09871353341(delhi)
I got the information from SAKAL  daily paper ( feb2008). about the LED solar technology,  I’m  civil engineer working in water resources department of Government of Maharashtra and an electronics hobbiest from my childhood.This article kindled my interest to explore more about the technology.

Then on internet searched for the manual for LED lights, LED suppliers, basic circuits for LED, solar panel manufacturers and other relevant details. I came across the manual published by Vigayan Ashram in a pdf file form. Answers to my all querries were in this manual and studied it for quite sometime. Then I began the survey ,
I purchased  CCU( charge controller unit) from Tilak road for Rs. 600/-.
Solar panel supplier found at Solar Shoppee in Lajpatnagar Delhi. I purchased a 10W solar panel from him for Rs. 2200/-.
From lala lajpatrai market at chandani chowk i purchased 10mm white LED packet which contained 500 LED’s.
I myself in (Autocad) designed a pcb layout for 9 LED  with resistance to work on 12v DC current. I searched for pcb manufacturer, my friend from my office gave me address of his friend a local person from kalewadi pimpri. I gave him design and he supplied me 50 PCB for Rs. 7 per pcb. I purchased the 12v 7AH battery from Pune budhwar peth electrical market for Rs. 650/-.
Now all components were ready I soldered the LED onto pcb alongwith one resistance. I tested on the battery and it worked. I installed the panel on my terrace and connected it to the ccu, then i connected two such led installed pcb’s to ccu, ( these lights were installed in WC and bathroom of my house ) and then connected the battery 12v 7Ah rating. We in keep these lights ON for whole of night and stopped using MSEB lights for WC and BATH. My search for further development was still on. I came across LED House on Grant Road Mumbai. Where i purchased 12v LED strips with 24(5mm) led on each strip. They consume only 350 mA current. I purchased six strips for Rs. 90/- each in Apr 2008. I installed these strips Hall, Kitchen, Bedroom, WC, Bath and in front of Staircase. I completed the wiring for each strip and brought them in one switch box where i installed six switches. I connected this switch box to load point of ccu. My staircase light is on for whole night we never switch of this light. Other room lights are switched on whenever mseb light is not their. For last nearly two years not purchased and single candle. Whenever light fails in night we use this system. Staircase light gets ON in evening and goes off when charging in morning starts. I have not spent and single penny on this arrangement  since the  installation. Daily the battery gets charged and discharged , we use staircase light and bedroom light continuously. Myself  and my family

Participation in Festival of Innovation and Entrepreneurship (FINE) 2018 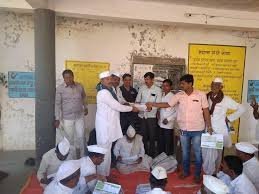